A few musings on "Turtles as aliens" 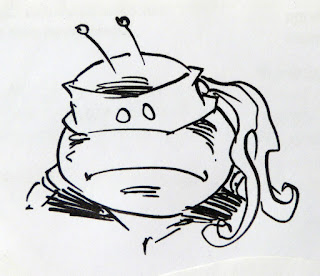 I have had several requests from TMNT fans during this past week to comment on the idea of the Turtles being "reimagined" as aliens for the upcoming TMNT movie to be produced by Michael Bay. A few people -- who don't seem to understand that I am no longer in control of the property -- want me to stop this, somehow. Obviously, I can't do that, even if I wanted to.
But I would actually encourage TMNT fans to swallow the "chill pill" Mr. Bay recently suggested they take, and wait and see what might come out of this seemingly ill-conceived plan. It's possible that with enough truly creative brainpower applied to this idea, it might actually work. I'm not saying it's probable, or even somewhat likely… but it IS possible.
However, as I have pondered this further, I have realized that in one way it IS truly a genius notion. Let me explain…
Over the years, I have made no secret of my distaste for what I consider to be the weak, facile, creatively bankrupt idea which can be summed up like this:
"If FOUR Ninja Turtles are good, then FIVE (or more) Ninja Turtles MUST be better!"
It was in large part this brain-dead notion that led to the creation of the execrable "Venus de Milo" character in the blessedly short-lived live action TV series  "Teenage Mutant Ninja Turtles: The Next Mutation". And I can't tell you how many times we got mail in the early years of the Turtles from people who thought it was simply an amazing idea to do a "fifth Turtle", and how many times those same people suggested that this fifth Turtle be named "Picasso". And many times, the brilliant idea to explain this extra Turtle was that, instead of there being just four pet shop turtles in that glass bowl in the origin story, there were really FIVE.
Sigh.
I'll admit -- I have played with the idea of more Turtles myself, a few times. There was the character of "Kirby", the "fifth Turtle" that Kevin Eastman and I came up with for one of the several movie ideas which never came to fruition. And I created the "Super Turtles" in Volume 4 of the TMNT comics published by Mirage… and they eventually appeared in one episode of the 4Kids animated TMNT TV series.
But…
… in both those instances, I was careful to make these Turtles not just MORE  of the same, i.e. just extra TMNT. In both of the above cases, the extra Turtles were from other dimensions… and the Super Turtles, especially, were VERY different from the Ninja Turtles. I don't remember all the details of the work we did on that "Kirby the Fifth Turtle" thing, but I DO remember being adamant that if we were going to agree to the idea of a "fifth Turtle", it would have to be something other than the harebrained "there was an extra Turtle in the bowl, etc." idea.
Is that too fine a line? Yeah, maybe… but to my way of thinking, anyway, it is a CLEAR line.
Anyway, to get back to the "TMNT are aliens" thing -- the reason I say it could be a "genius" idea is that -- for the first time -- someone has come up with a way to have as many freakin' Turtles as they want. I mean, if the TMNT are actually members of an alien race, there could be a whole PLANET of them!
Joy. -- PL
Posted by PL at 9:06 PM