Blast from the Past #20 repost: Original Turtle Action Figure Prototypes

When, back in January of 1987, Kevin and I made our first trip out to Playmates Toys' offices in California to discuss plans for the proposed animated show and the toy line, we were shown two Turtle figure sculpts, illustrating two possible directions Playmates was considering for the look of the action figures. The first one we saw was this "chunky style" Turtle (below), very much in the style of the original "Masters of the Universe" action figures. 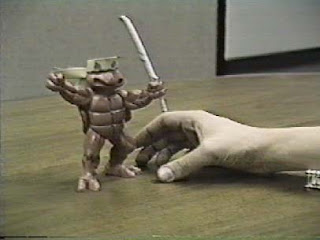 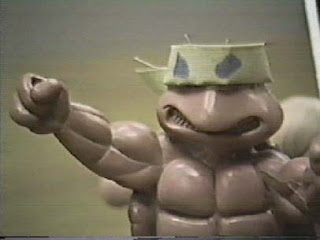 It was a nice sculpture (although the goofy cloth headband with the eyes drawn on it was kind of lame), but when we saw the second version (below, on the right) we were sold. 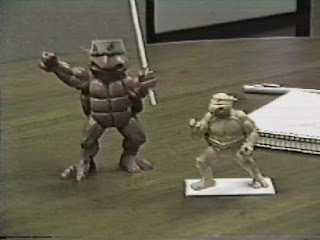 It was much closer to the way our Turtles looked in the comics, and as you can tell from the image, very close to the way the TMNT action figures eventually appeared. It's kind of scary to think of what the line would have been like if we had gone with the first version...! (These images are frame grabs from a VHS-C video recorded on a primitive lunchbox-sized video camera in the conference room at Playmates' offices. Trivia note: that's Kevin's hand in the images.) -- PL
Posted by PL at 8:11 AM

Email ThisBlogThis!Share to TwitterShare to FacebookShare to Pinterest
Labels: Blast from the Past, Kevin Eastman, Playmates, prototype, TMNT